“Concrete kän-krēt n. - a hard strong building material made by mixing a cementing material (commonly Portland cement) and a mineral aggregate (such as washed sand and gravel or broken rock) with sufficient water to cause the cement to set and bind used in the constructing of bridges, buildings, dams, pavements, tunnels and smaller projects." (Webster's Third New International Dictionary)

Concrete has been used as a building material since Roman times. It is extremely versatile and durable, as the many ancient concrete structures that remain intact thousands of years after erection will attest. Today, concrete is considered the most widely-used building material in the world.

Why consolidate concrete? Why remove the air?

If the entrapped air is allowed to remain in the concrete during the curing process, and the concrete is not completely consolidated, the finished volume of the concrete may be as much as 30% greater than intended. The entrapped air, present as honeycombed pockets as well as smaller voids, creates weak points that will significantly lower the working strength of the cured concrete.

Once properly consolidated, the resulting concrete will be more homogenous, have fewer cracks and voids, be significantly stronger and more durable, less permeable and will have an improved finish with fewer visible flaws. In short, it will have become concrete.

Among other differences, concrete can be made with varying percentages of water and many different sized aggregates. The Slump Test (ASTM C 143) is a standardized method of classifying the “workability” or “flowability” of wet concrete. The test measures the amount of “slump” or the effect of gravity on a concrete sample. The lower the number (the less slump) the drier the mixture is. Higher slump test values indicate more plastic or flowable concrete mixtures.

How is concrete used?

Concrete is widely used as a building material because of its high compressive strength. However, unless reinforcing elements (such as steel reinforcement or rebar) are incorporated, concrete has very low tensile strength.

Compressive Strength - the ability of a material to resist applied pressure without cracking or becoming permanently deformed.

Tensile Strength - the ability of a material to resist being stretched or pulled without cracking or becoming permanently deformed.

A concrete structure can bear a tremendous weight, so long as the load is applied in compression. Since the presence of entrapped air in freshly- poured concrete is known to lower the compressive strength of the cured concrete, any concrete that is intended as a structural or load-bearing component must be properly consolidated.

There are two basic methods used to consolidate concrete:

Which method is used is largely dependent on the desired results. Low-compression or non- structural components (sidewalks, small pads, etc.) are occasionally manually consolidated. However, this method does not produce a finished product that is capable of withstanding any significant compression or tensile stress. To achieve a finished concrete product that meets these requirements, consolidation by vibration is strongly recommended.

Consolidation by Vibration is achieved by adding a mechanically-induced combination of force and frequency to gravity and allowing those forces to act on the freshly-poured concrete. The proper combination of force and frequency will result in fluidization of the concrete ensuring that the concrete will retain its homogeneity while seeking its lowest level and allowing the entrapped air to escape through the surface.

Initially, the force component of the vibration causes rapid disorganized movement of mixture particles within the vibrator's area of influence. The mortar is temporarily liquefied. Internal friction, which enabled the concrete to support itself, is reduced by up to 95%. The mixture becomes unstable and gravity causes the concrete to seek a lower level and denser condition. A frequency of 9,000 - 12,000 vibrations per minute initiates resonance in (or “excites”) the cement, causing the ultra-fine cement particles to release the extremely small air pockets that have adhered to the cement, so that the mortar fills in all of the spaces around the aggregate. The concrete will flow laterally as restricted by the formwork and around the reinforcing steel embedments. This movement causes both large and small pockets of entrapped air to rise to the surface.

Once enough of the entrapped air has risen to the surface to achieve concrete consistent with the intended strength of the mixture, the vibration is complete. In practical terms, it is neither possible nor necessary to remove all of the entrapped air in the consolidation process.

Concrete Vibrating systems can be categorized as: 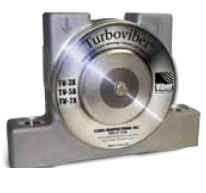 The vibrating mechanism is inserted into the freshly poured concrete.

Contractors select either or both equipment styles based on the finished product requirements, jobsite conditions or other factors.

The motion of a vibrating head is generally described in terms of Frequency (the number of vibrations per minute) and Amplitude (the deviation of the head from the neutral position as it oscillates). The Centrifugal Force generated is typically expressed in pounds, since acceleration (g-force) is difficult to determine because the amplitude in concrete cannot be easily measured.

Two factors (the speed the eccentric weight turns and the unbalance of the eccentric weight) determine the force that is produced and the subsequent the Radius-of-Action of the vibrating head. This is important because the vibrator head is repeatedly inserted and removed to ensure that the entire structure is properly consolidated. (Insertions are normally made at approximately 1.6 x the Radius of Action to ensure adequate overlapping.) In practical terms, larger diameter vibrators will have larger areas of influence and require fewer insertions. Additionally, lower-slump concrete (because of the lower moisture content) will require greater force levels to initiate the first stage of consolidation - liquefying of the mortar - so larger diameter heads are recommended for low-slump mixtures.

While Internal Vibrators are the simplest and most common method of vibrating concrete, and typically provide uniform compaction, the operator-induced variables (number and proximity of insertions as well as duration of immersion in the concrete of the insertion) may require somewhat more supervision and training in the use of Internal Vibrators to ensure proper consolidation.

External Vibrators remain “outside the pour” and deliver the vibration to consolidate concrete through the formwork. External Vibrators are commonly used in production (precast concrete) where there is consistency of concrete mixture, formwork, power source, etc. Once the proper locations, frequencies and durations have been determined, External Vibrators do not rely so much on the skill of the operator as with Internal Vibrators.

Because of the frequency requirement for optimum consolidation, the most common External Concrete Vibrators use compressed air (pneumatic) to provide the power to rotate the eccentric weight. Occasionally hydraulic and electric motors are also used, though their lower frequencies will reduce the effectiveness of the vibration. External vibrators may be mounted to the formwork using fixed or removable brackets to facilitate relocation of the vibrators as the wet concrete is placed into the formwork.

Once proper locations and methods of mounting the vibrators and optimum vibration durations are determined, External Vibrators provide a consistent and effective method of compacting the concrete. Due to variables in formwork and concrete consistencies, using External Vibrators may require additional preparation and planning to ensure satisfactory results.

Head Size / Type - Next, the operator will select the head that is most appropriate for the project. Most projects will use standard Steel Tip heads for effectiveness and longer service life. Rubber-tipped heads may be selected for additional protection for lightweight or aluminum forms. Completely- encased heads (polyurethane or rubber) may be used when epoxy-coated reinforcement is present. Other heads such as low-force or shallow pour heads may be used for special conditions.

For speed and ease of consolidation, the contractor will likely elect the largest diameter head that is feasible for the project. Based on higher amplitude vibration, larger heads will have greater areas of influence; therefore will require fewer insertions at greater interval spacing to achieve proper consolidation. Fewer insertions results in faster working times. Factors that may restrict the use of larger heads include:

Flex-Drive Length - In general terms, the contractor will prefer to use the shortest flex-drive that will allow complete access to the concrete being consolidated.

Example A - Contractor ABC has a concrete slab project to be poured several floors above grade. The slab to be poured is fourteen inches thick (1'2” / 0.356 m) and has a significant amount of reinforcements. Average annular openings are four - six inches (4” - 6” / 100 mm - 150 mm). The concrete for the project is plastic with a slump test measurement of seven inches (7” / 175 mm). There is electrical power available, but no readily- available compressed air supply. The contractor is likely to choose between Electric and Gasoline Vibrators. Since the overall area to be consolidated requires numerous insertions, the contractor elects to use electricity as the power source.

Example B - Contractor XYZ has a tilt wall project to be poured on site. There is electrical power available, as well as several portable air compressors. The contractor may choose Electric, Gasoline or Pneumatic Vibrators. Since there is adequate ventilation, and the area to be consolidated requires numerous insertions, the contractor elects to use gasoline as the power source. The wall section to be poured is twelve inches thick (1' / 395 mm) and has an average amount of reinforcements. Average annular openings are eight - twelve inches (8” - 12” / 200 mm - 300 mm). The concrete for the project is plastic with a slump test measurement of five inches (5” / 127 mm).

Example C - Contractor 123 has a structural column project to be poured on site. There is electrical power available, as well as several portable air compressors. The contractor may choose Electric, Gasoline or Pneumatic Vibrators. The contractor elects to use compressed air as the power source. The slab to be poured is forty- two inches square (3'6” / 1.07 m) and thirty feet tall, with a significant amount of reinforcements. Average annular openings are three - four inches (3” - 4” / 75 mm - 100 mm). The concrete for the project is very stiff with a slump test measurement of two inches (2” / 50 mm).

Note - If specific density of the concrete is unavailable, use a standardized weight of 150 pounds per cubic foot (2,400 kg / m 3 ) for approximation.

Forms should be well made to withstand the strains of vibration.

The following guidelines for spacing External Vibrators have been developed, but contractors should determine specific spacing requirements for each project to ensure complete coverage of vibration and successful consolidation.

Moving one's hand over the form (or for greater accuracy, using a vibrating reed tachometer) will help to locate the limits of the areas of influence of the vibrators. Care should be taken to avoid large gaps between areas being vibrated as well as excessive vibration at specific areas.

Concrete should be placed in the forms in evenly dispersed layers (lifts). Lift height should not exceed 20” otherwise the weight of the concrete can prevent the entrapped air from escaping. Vibrators should be operated in conjunction with each lift until the concrete is fully consolidated. As each subsequent lift is placed, additional vibrators should be located (or moved from the previous level) and operated. Some operators prefer to operate the previous lift's vibrators for a short period of time to promote “knitting” of the two layers together.

Alternating the vibrators on a concrete form

Vibrators on the opposite side of the form. 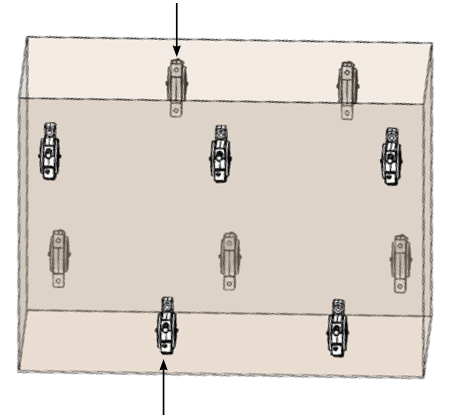 Vibrators on the near side of the form.

In some cases, when the thickness of the concrete to be consolidated is extraordinarily large, contractors may choose to use Internal Vibrators in the center section, with External Vibrators used simultaneously along the outer edges.